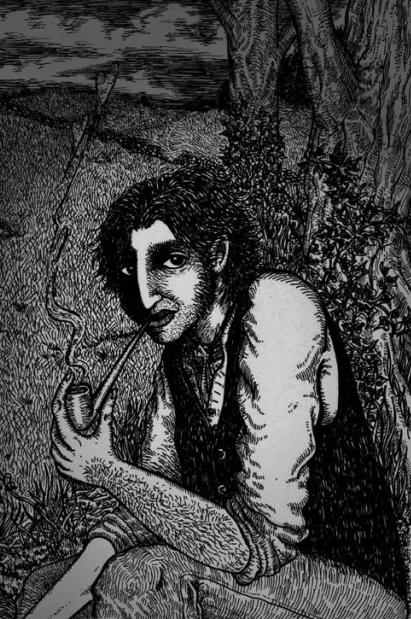 If you wondered why Irish males have a reputation for being smooth talking, tall dark and handsome strangers, then you need look no further than the Gancanagh (Gawn-canack).  The name has a literal translation of ‘Love Talker’ and the title is no word of a lie!

One of the solitary fairy folk, the Gancanagh is part of the leprechaun family, although you wouldn’t think it to look at him.  Tall, wiry and very easy on the eye, women are drawn helplessly to this ethereal being before he even begins to weave his intoxicating magic.

Tales of this mystery man stealing hearts and sanity date back over millennia.  Likened to the Incubus, the Gancanagh is more subtle and more deadly.  Traditionally his target would be the women of the rural areas such as milkmaids, devouring their chastity and casting shame on the family, but he moves on with the times as much as he does with locations.

He is dressed stylishly and oozes charm with his distinguished pipe or ‘dudeen’ pressed between his lips. The Gancanagh is nonchalant on the surface and appears lazy but don’t be fooled. He will charm, lie and ultimately seduce you – once that happens, your deadly fate is sealed.

I may have misled you by painting a romantic picture of this fairy, however this is just the façade. He isn’t just looking for love, he is looking for complete control using his intoxicating touch and when his prey is completely dependent he callously withdraws his affection and leaves.

The victims of the Gancanagh fall into a lovesick frenzy, and like any drug addiction it takes over their bodies and minds with disastrous consequences.  Isolated from family and friends, pining for the touch of the Gancanagh, just spiralling into madness until death becomes a welcome but early release.

In modern culture W.B Yeats referred to the Gancanagh as being mysterious and relatively unknown in ‘Fairy and Folk Tales of the Irish Peasantry’ yet he has become know – it is possible that this creature inspired Oscar Wilde to write of Dorian Gray. This enigmatic yet deadly fairy even found himself featured in a Cork based episode of ‘Murder She Wrote’!

Of course there is one way to protect yourself from this seductive creature.  An amulet made from the twigs of a rowan and mistletoe, pinned together with an iron nail and bound with a blood soaked thread.